The ability to analyze different alternatives for protection against water hammer effects in a water pipeline system, either supplied by gravity or supplied by pumping, is one of the main features of Ariete, our water hammer software, which through the “Analysis Scenarios” creation allows comparing the results, obtained in each of these scenarios, simultaneously.

In this article, we present the characteristic aspects of Scenarios Management in Ariete, and we’ll implement alternatives for protection against water hammer through an example of a pumping pipeline which suffers an accidental stoppage for power supply failure into the respective pumping station.

By default, when you create a new project in Ariete, the Pipeline and its upstream and downstream devices are created inside an analysis scenario called “Base Scenario,” which will be active while a new one is not created.

The idea behind the Base Scenario is that, with it, the Original pipeline system, i.e.: with no water hammer control devices, will be modeled, with it being possible to change its name and description from the Scenarios Menu → Edit Active Scenario: 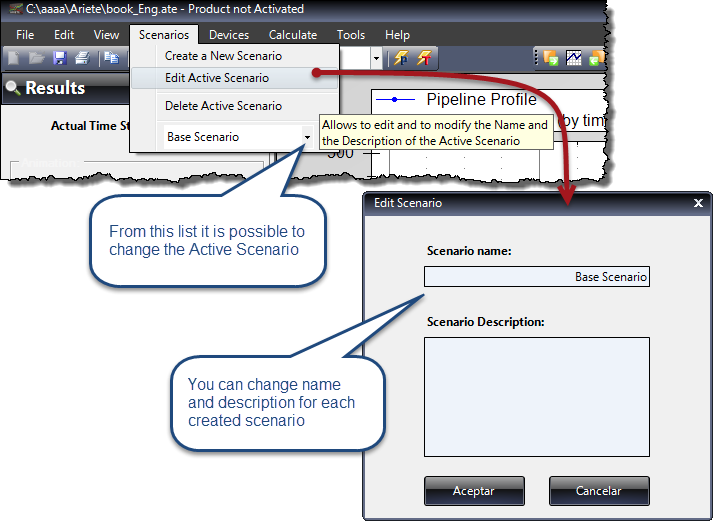 In selecting the name for each scenario, it is important to note that it will be part of the chart’s legend that is shown in the main window’s longitudinal profile and is, therefore, advisable to use short names to avoid visually overloading of this chart.

For this example we’ll modify the name to “Original System.”

Thus, the Original System scenario will contain the pumping pipeline system with no modifications (no control devices against water hammer effects), as we saw in this Article.

We wish now to observe what effect would occur when installing a One Way Surge Tank in the control point at 5373 m pipeline’s chainage and, to do so, a new scenario called “One Way S.T.” will be created through the Create New Scenario option at Scenarios menu.

Once created, this scenario will automatically become the Active one, which is confirmed from the list at the Ariete’s main toolbar:

By becoming an Active scenario, any modifications (adding water hammer control devices) will be effective and visible only in that scenario, and the remaining scenarios remain unchanged.

The idea of ​​the scenarios in Ariete is to facilitate the water hammer calculation results interpretation when different types of methods or devices are used in the search for pipeline system protection against this phenomenon.

Any change in the pipeline’s geometry or characteristics (diameter, wave speed, etc.) will be reflected in all scenarios, with the water hammer control devices used on each of them being the only difference between scenarios (and, of course, differences will exist in the respective results).

Thus, a One Way Surge Tank is added to this scenario (in this article we explain how to add interior devices) by entering the following data: 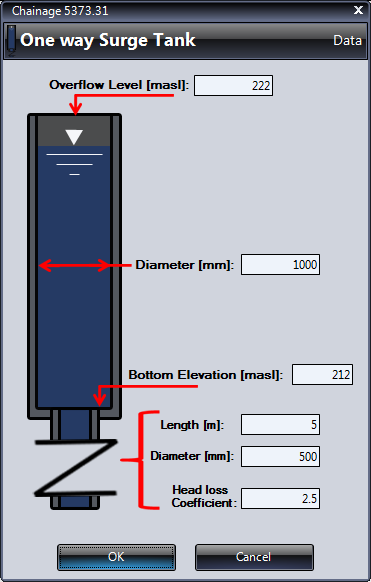 When closing all the opened dialogs, the water surge tank symbol will be shown in Ariete’s Main Window: 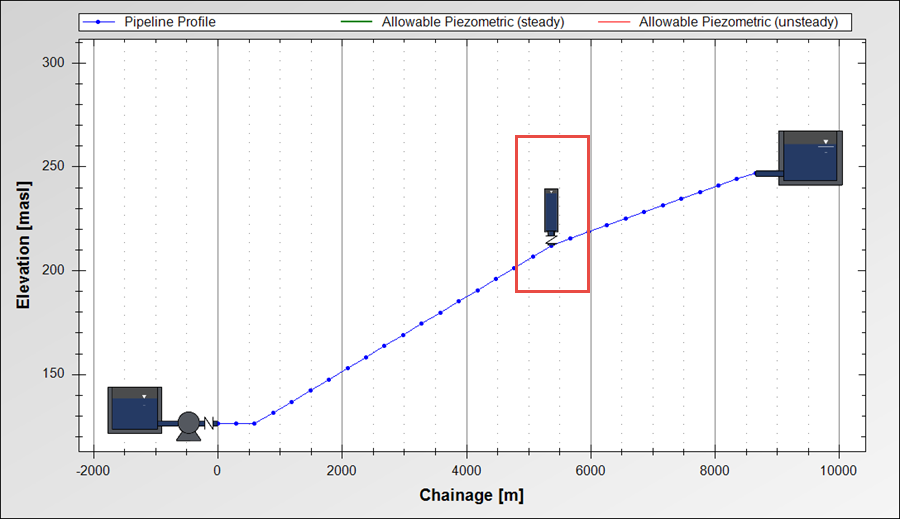 If we switch the Active Scenario to the “Original System” one, we will see that the Surge Tank is not present, thus indicating the difference between the two existing scenarios.

When performing the Unsteady calculation, we’ll obtain the results for our new Scenario: 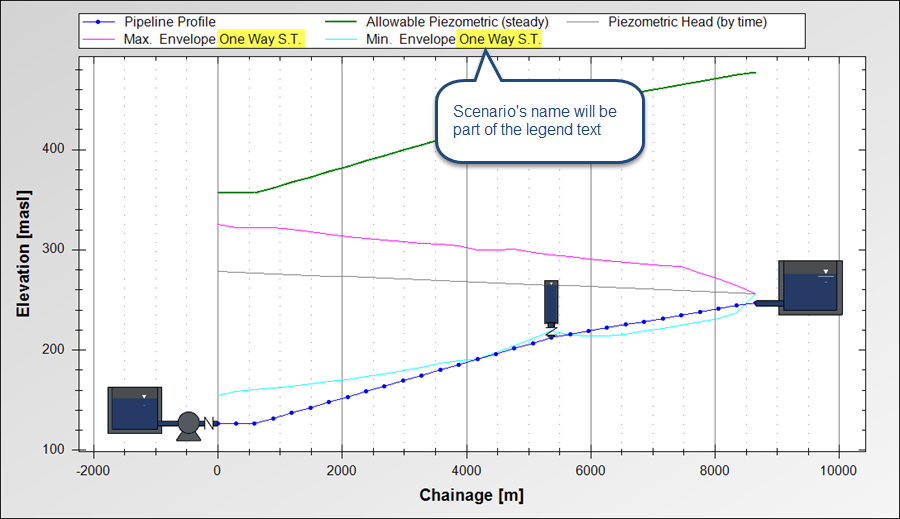 Having more than one scenario (in our case, two), we only need to activate the “Compare results with other Scenario” checkbox in the Results panel, to enable the list of existing scenarios in this Project, and then select and click on the respective scenario to compare. In our case, it will be the Original System scenario: 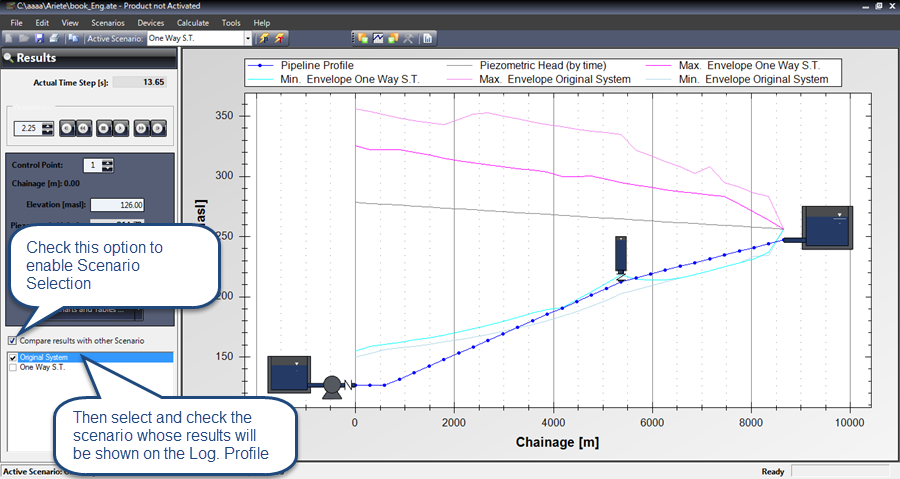 In addition, by keeping the “Compare results with other Scenario” option active (checked), a results charts for each control point will contain results for the selected scenarios besides the actual one: 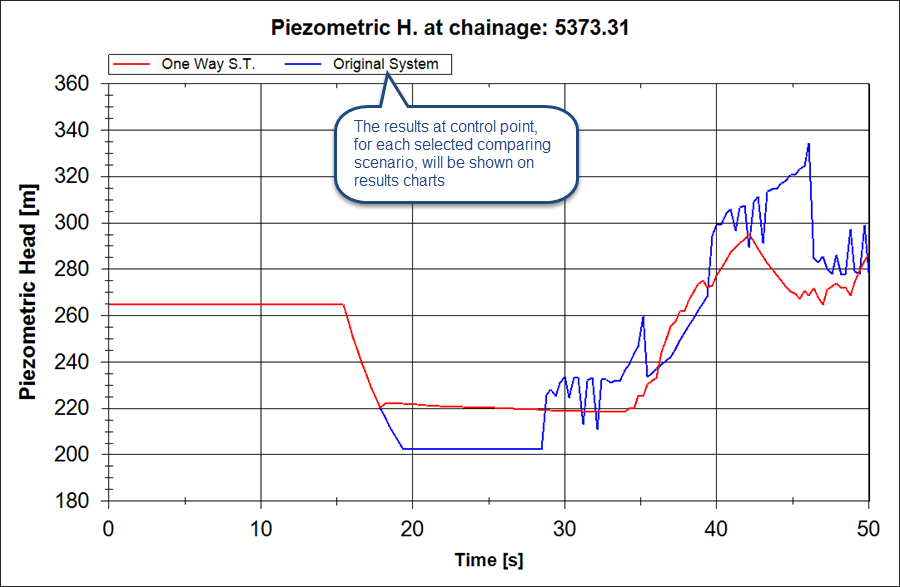 Finally, it should be noted that Scenarios creation for Water Hammer calculation and analysis in Ariete has the following considerations: