Two New Features in the Ariete’s most recent version, our Water Hammer Software, which you must know

In Ariete’s version 1.1. we have included, besides some bugs corrections, two new features that will allow users to have more control over the hydraulic parameters used in the pipeline’s water hammer calculation.

These improvements have arisen from the suggestions of several of our water hammer software licensees, so we hope they will be useful in their water pipeline design works.

In the previous version, it wasn’t possible to modify those values, as they were fixed and based on the available literature and in function to the open percentage of each of the three types of flow control valves included in Ariete.

In this new release, Add and Delete Rows options have been included in Valve’s Kv Editor:

Thus, for each of the available types of Valve (Gate, Butterfly, and Needle), the user is able to specify his own data and keep them saved into the project’s file.

Additionally, an ’emergency’ button has been included so you can restore the valve loss coefficients values that Ariete, by default, includes: 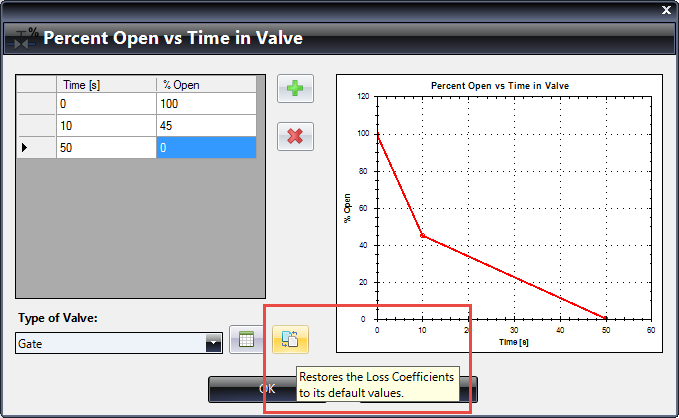 When this reset button is used, the values for all three available types of valve will be modified, so that any changes made by the user will be discarded.

While the wave speed automatic calculation option is maintained in this version of Ariete, we have added an additional button besides wave speed text box in the Pipeline Data dialog, with which the users can access a new dialog to specify their own data for the calculation of this very important parameter in Water Hammer calculation: 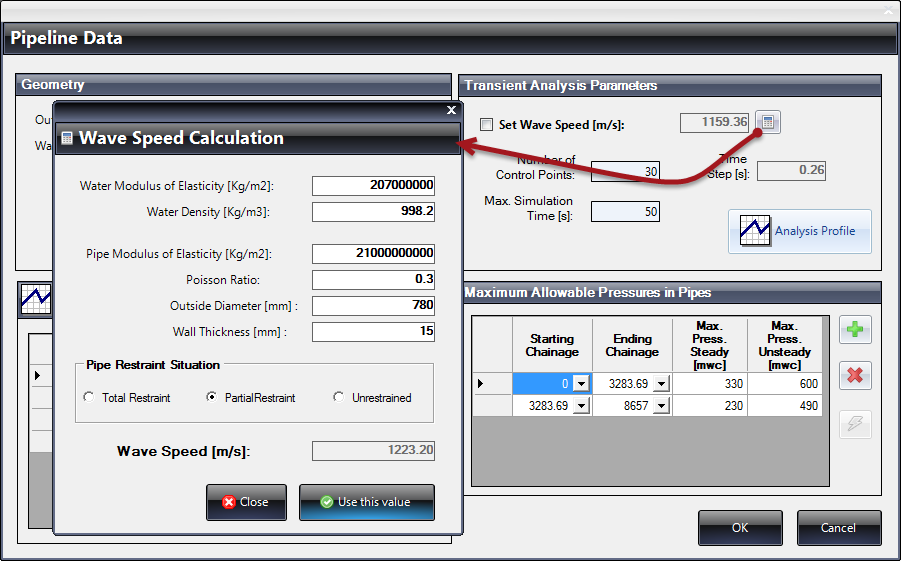 So the ability is given to the user to specify their own values ​​for this calculation, as well as the possibility, by pressing the button ‘Use this value,’ to automatically change the value in the Wave Speed ​​field by the calculated one:

Care should be taken to certify that the parameters entered in this dialog lead to fair wave speed values because, when pressing the button “Use this value,” the automatic calculation option incorporated in Ariete will be overridden.

Of course, when disabling the check box “Set Wave Speed [m/s],” the automatic calculation will be restored, based on the parameters entered in the Geometry group inside the Pipeline Data dialog and in conjunction with those that Ariete internally incorporates, depending on the selected pipe material.

As you see, Ariete, the water hammer software, now has two new features that will facilitate your calculations. So what are you waiting to try it for?