The Water Hammer in Pumping Mains—What You Should Know

A pumping pipeline is one that is used to convey water from points at lower elevations than others, located at higher elevations. The only way to overcome the difference in elevation is through the use of pumps, usually of a centrifugal type if we refer to Water and Wastewater applications.

The design of this type of system is usually performed under steady flow conditions, i.e., considering that along the system’s operational time, variations in hydraulics related conditions will not occur, as would the pump’s rotational speed variations or changes in the percent opening of valves installed in the pipeline.

On the other hand, when speaking of Water Hammer in pumping pipeline systems, we are referring to an unsteady flow phenomenon (hydraulic transients) in which the variation over the time of the hydraulic conditions is such that “disturbances” are generated, leading, eventually, to higher hydraulic head levels than those that would occur under steady flow conditions.

As an example, shown in the following chart is the piezometric head variation over the time that occurs at a point on a pumping pipeline when the rotational speed of its pumping equipment has suddenly changed from its nominal value, at 100 seconds time, up to 10% of it and then resettled to 100% at 180 s: 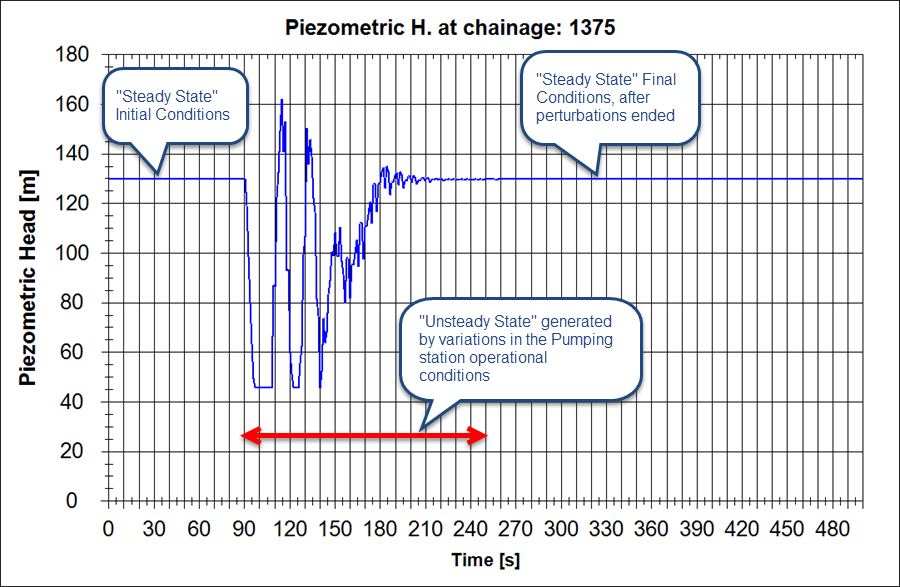 From the previous chart, diverse conclusions can be extracted, but the most significant is that the perturbation generated by the change of the operative conditions in the pumping system (the pump’s rotational speed in this case), generates hydraulic head pressures whose values are greater than those obtained under “normal operation” conditions (refer to 115 seconds point). In our example, we would expect a water pressure surge of about 30 meters of water column (mwc), which may exceed the pipe’s pressure rating if this situation is not taken into account in the system’s design.

The Water Hammer in pumping pipeline systems is sometimes underestimated in the design phase, usually by the need to use “advanced” methods for determining the maximum and minimum surge pressures that could be generated under this unsteady flow phenomenon and which, in some cases, can reach big magnitudes that will definitely lead to compromising the physical integrity of the pipeline and pumping equipment if the previsions of the case are not taken.

Regarding the pumping pipeline systems design, the most unfavorable situation (in terms of the maximum possible head pressures in the system) is when sudden or an unexpected stoppage of pumping equipment generates the occurrence of water hammer. This sudden stop is normally associated with failure in the electrical energy supply to Pumping Station’s drives.

This situation is the worst, since it is precisely the one that cannot be controlled by operational personnel or by any special device, thus creating major disturbances in the system’s hydraulic conditions and causing not only a significant pressure upsurge but also a pressure down surge that might lead to pipe collapsing as a vacuum (column separation) can occur under this condition.

Normally, the pumping station’s equipment detention is done slowly by gradually strangling valves installed in their discharge lines and then turning them off progressively which, although it is a situation of unsteady flow, implicates a quite moderate variation in flow conditions and, certainly, the associated pressures won’t differ in significant form from the steady flow ones.

The aforementioned considerations show that in the analysis of Water Hammer in pumping pipelines plays an important role the speed at which the equipment stops. The detention speed of pumping equipment mainly depends on the moment of inertia of the rotating parts of the motor and the pump itself, yielding to the extent that as the higher this value is, the higher the detention time for the pump will be, which will lead to minor perturbations in the pipeline system.

In the next image, the Ariete’s results are shown in the comparison of two scenarios in which the water hammer is analyzed in a pumping pipeline with the same geometrical characteristics, but in one of this scenarios the moment of inertia has been varied (increased respect to the original one):

As seen in the Low Inertia scenario, the piezometric head envelope will be at higher elevations than the estimated one at the High Inertia scenario. That is so because the system, in the latter case, is “taken to rest” in a major time span.

Increasing the Moment of Inertia of the Motor-pump assembly is one of the possible options for mitigating the effects of water hammer in pumping pipeline systems, and this is achieved through the incorporation of a Flywheel, which is a metal disc attached to the motor shaft and which has sufficient inertia to achieve the desired dimming effect.

An additional situation that must be taken into account is the possibility that the pumping equipment, upon the occurrence of water hammer in the system, can operate with reverse flow due to the pumping stopping and the return of the water column towards the pumping station from higher points in the pipeline profile.

While there are universal curves for simulating the operation of the pumps under these reverse flow conditions, the ideal situation would be to have specific information for the type and model of the pump used in the system under analysis, which is not always possible because they are complex curves that must be generated by the equipment’s manufacturer through specific tests.

Generally, the information supplied by the manufacturers is limited to the characteristic curve of the pump, which is restricted to positive values ​​of flow and pumping head. This is why in Ariete we have chosen to restrict the operation of the Pumping Stations through the incorporation of a check valve in their discharge pipe, according to which, when reverse flow towards the Station is determined, the condition “Closed Return Valve” (0 pumped flow) will be imposed in order to continue the simulation.

The condition of considering the existence of a Check Valve at the pumping station discharge pipe, although it seems a simplification for water hammer calculation purposes is, in practice, the most widely used because it is common for any Pumping installation to include these devices to prevent reverse operation of equipment, which is in any case undesirable.